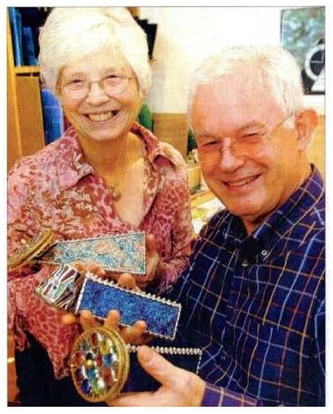 Cape Kaleidoscopes is proud to be the only USA retailer representing the brilliant work of Frank and Janet Higgins.

The Higgins operate the United Kingdom’s only studio dedicated to the design and creation of kaleidoscopes. They brought nearly twenty years of experience in glasswork to bear in developing their unique craft which embraces techniques of stained glass, lampworking, glass-blowing and fusing, allied with precision optical glasswork.

In doing so, the Higgins have created a renaissance in the UK of a craft not seen since the early nineteenth century when Sir David Brewster invented the kaleidoscope. His creations enjoyed popularity as one of a class of “Philosophical Instruments”, but persisted only as childrens’ toys through most of the twentieth century

The Higgins create high quality instruments, which produce spectacular images while at the same time being pleasing externally. They are designed to last a lifetime. As their output is not large, kaleidoscopes made by the Higgins will remain rarities.  Their work won three awards at the international exhibition “Kaleidoscopes 200 years” in Washington DC.