Tuscaloosa, Alabama - be sure to stop by Snow Hinton Park to see the 7' tall aluminum sextant installation titled "Kaleidoscope" by by Eric Nubbe, a University of Alabama art alumnus and foundry specialist. 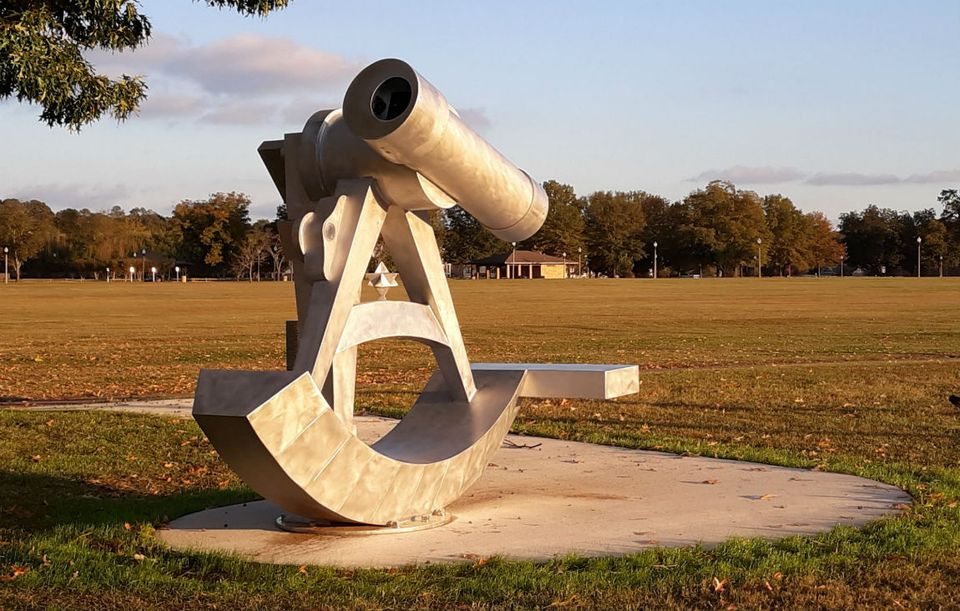 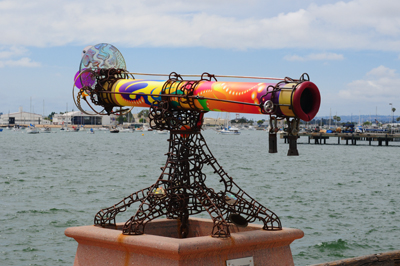 San Diego, California - in the Gathering Place, a community park at 50th Street and Imperial Avenue in Lincoln Park.  It's made of old wheels and gears from re-purposed bicycles. It has several kaleidoscopes built into it, so when you look down a bike tube you see spinning shapes and colors. 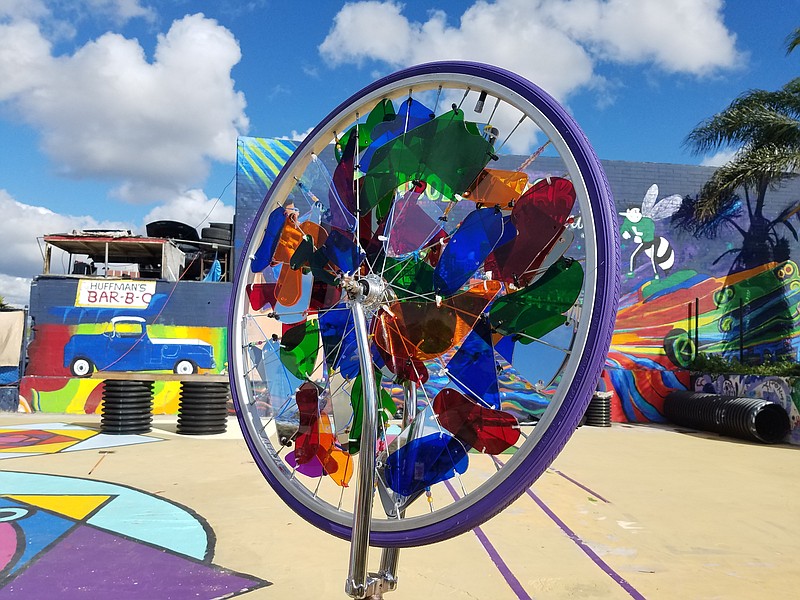 Venice, Florida -  Located in Centennial Park, the kaleidoscope sculpture is placed on an ADA-accessible concrete pad between the Centennial Fountain and the Gazebo and contains two bronze kaleidoscopes aimed at a rotating bowl of flowers maintained by Venice Area Beautification Inc. volunteers. The sculpture was purchased with private funds and given in memory of the late James Hagler, former Historical Resources director for the city, whose idea it was to purchase the interactive work of art. 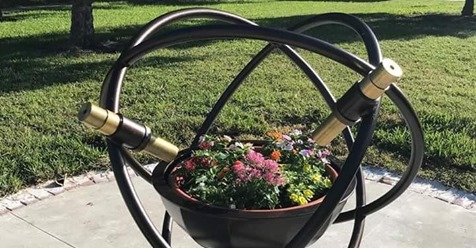 Washington, DC - within the Bridge Operator's Tower on the Arland D. Williams Jr. Bridge (14th Street Bridge).  Designed in 2008 by Mikyoung Kim, a Boston-based designer in response to a contest hosted by the city's transportation and art departments.  Click here for a quick history of the bridge and the tower. 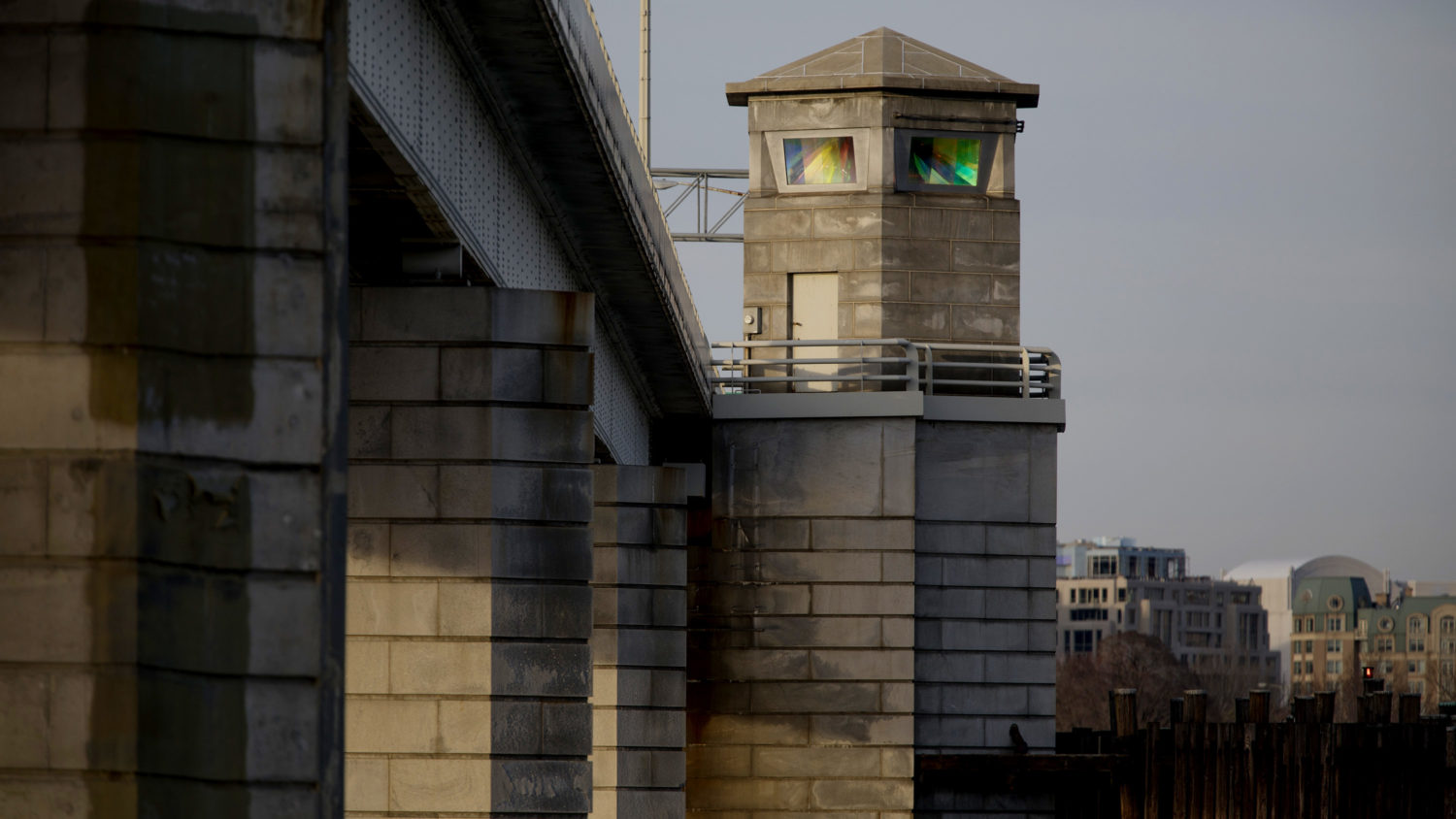 Twin Falls, Idaho - outside the Twin Falls City Hall, adjacent to the new splash pad is a massive kaleidoscope. Please share with your friends in the Twin Falls area and if you are there, stop by to experience the magic!! 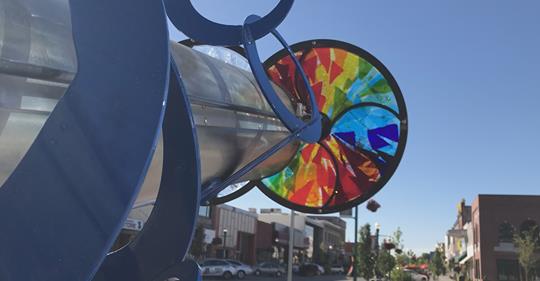 Postville, Iowa - “Hometown to the World”, by kaleidoscope artists Steve and Peggy Kittelson, is a three foot diameter mosaic glass globe using colors and textures of stained glass to make the continents and oceans around the globe. The globe rotates on a metal base and is surrounded by three swiveling teleidoscopes, each having a different mirror system for a different image. The surface of the globe has been embellished with fused dichroic creatures that identify with their location - penguins in Antarctica; panda bear in China; elephant, giraffe, camels, and pyramids in Africa; whales, sharks, tropical fish, flowers, birds, and other surprises for the viewer to find.

It is an outside installation in a small park amid wildflowers in Postville, Iowa, and represents the diversity of Postville. The project is part of the statewide “Byways of Iowa Public Art Initiative” and was made possible through a National Endowment of the Arts grant secured by the Northeast Iowa RC&D in part with the Byways of Iowa Foundation.

Mt. Tremper, New York - The World's Largest Kaleidoscope, certified by the Guinness Book of World Records, stands at 56 feet tall (the size of the old barn’s silo). The concept was designed by award-winning kaleidoscope artist Charles Karadimos, with its initial specially created imagery-based video designed by psychedelic art pioneer Isaac Abrams and his son Raphael, a computer artist. With theater-quality surround sound and a musical score by composer and drummer Gary Burke, the kaleidoscope’s main presentations utilize video playing off a three-dimensional three-mirror system that creates “a precise pyramid tapering from 15 feet at the bottom to five feet at the top, which reflect a constantly evolving virtual sphere with a 50-foot radius.” 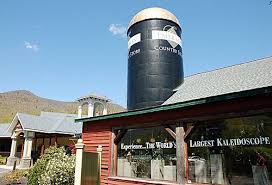 Waxahachie, Texas - The six-foot-tall kaleidoscope constructed of steel and glass is installed on the corner of Main and College Streets.  Eddie and Mary Elizabeth Phillips created the art pieces. 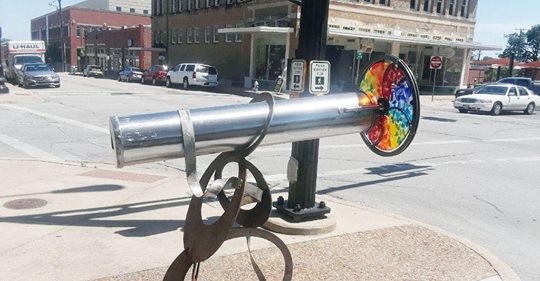 Alexandria, Virginia - Mirror Mirror is a kaleidoscope of color formed from an open circle that is 25 feet in diameter and 8 feet high. The structure invites visitors in, allowing them to move from the mirrored exterior into the rainbow interior. As the light changes, shapes and shadows dance in the reflections produced by both surfaces, creating mesmerizing patterns on the ground. Mirror Mirror, which is installed at the King Street Park at the Waterfront, will remain on view through November 2019 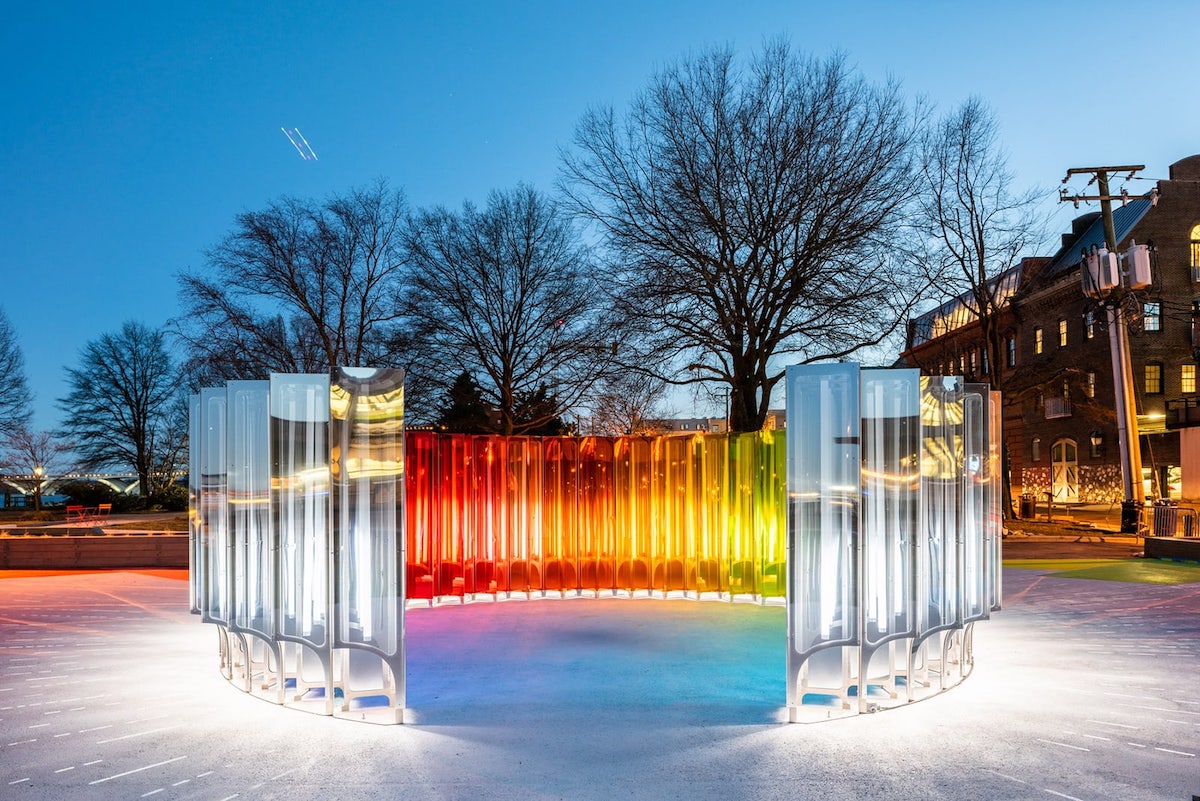 Des Moines, Washington - Marinascope is a steel buoy that was transformed by renowned glass artist George C. Scott into a walk-through kaleidoscope. Natural sunlight through fused-glass panels will illuminate the sculpture’s interior to reflect the city’s maritime connections and even provide a window to the community’s past with ghost-like images of historic waterfront scenes.  Check it out in the South End of the Des Moines marina. 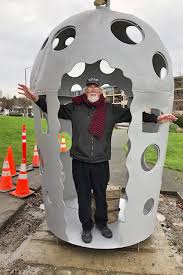 Wattens, Austria - This large kaleidoscope is made of of…you guessed it, Swarovski crystals. Swarovski World is home to 14 underground areas covered in these decadent crystals. The ‘crystaloscope’ is one of Swarosvcki World’s glamorous attractions, where designer André Heller created the world’s largest kaleidoscope. 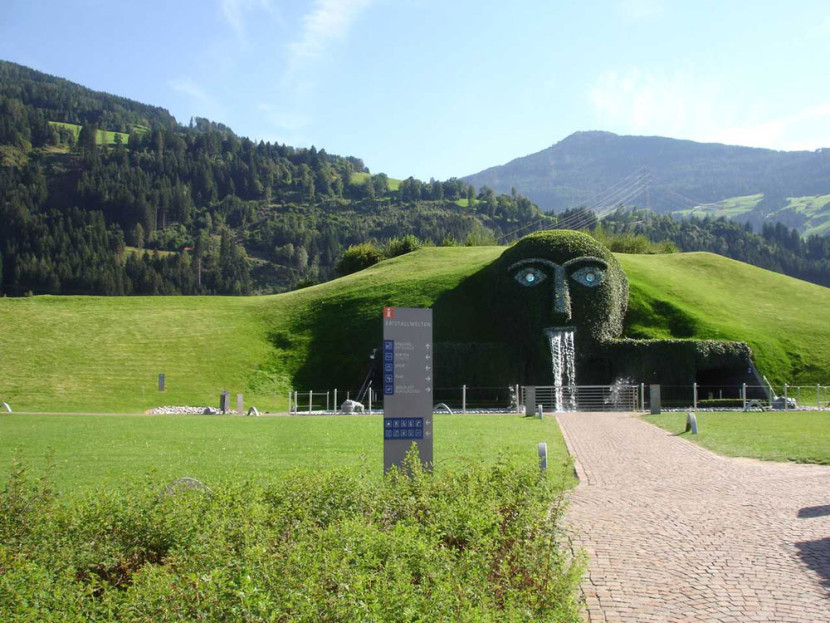 Gstaad, Switzerland - Look closely or you may miss the incredible Mirage Gstaad, a stunning installation by Doug Aitken. With every surface covered entirely in mirrors, the centerpiece of Switzerland’s annual Elevation 1049 arts festival stands out, or more accurately, blends in.  Installation on view until January 2021.

Surrey, United Kingdom - Newly exhibiting in June 2020 at the Hannah Peschar Sculpture Garden, Helen Twigge-Molecey has installed 3 ‘Kaleidoscopes’, featuring organic material sourced from the Sculpture Garden, an interchangeable pod allowing the viewer to insert what ever objects or materials one wishes and a series of resin ‘jewels’ housing foliage from elsewhere. Also installed is a ‘Teleidoscope’ - which captures views of the surroundings and creates magical patterns. Check http://www.hannahpescharsculpture.com/ for end date. 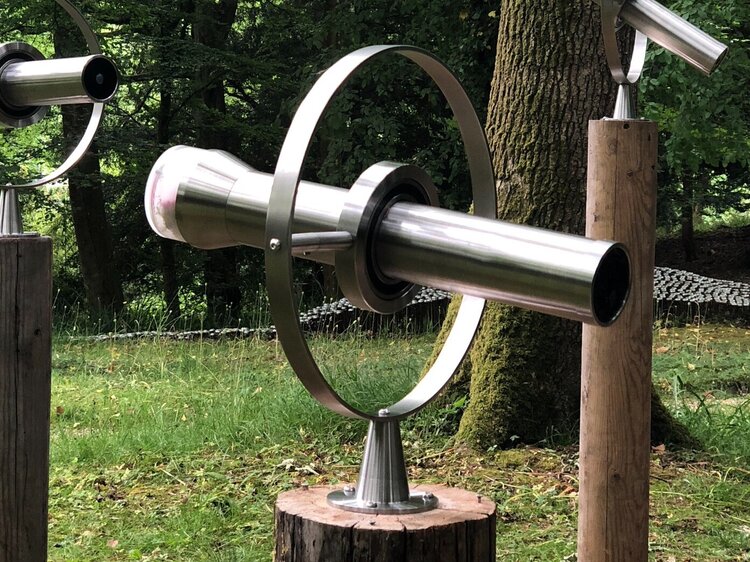